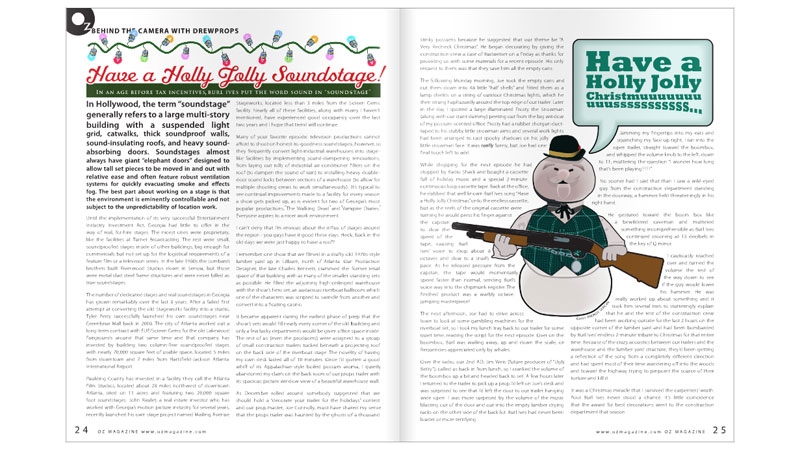 Have a Holly Jolly Soundstage

This is an article that I wrote for Oz Magazine, published by Gary and Tia Powell of Oz Publishing. I also created the artwork and layout for this article.

A good workplace encourages creativity from its employees and even in the hustle and bustle of filmmaking you spy people having fun and being creative in the moments between scenes. Sometimes somebody else’s creativity can nearly get you killed, as documented in this issue’s story about a creative Christmas presentation by my former propmaster Joe Connolly. Here’s an excerpt:

“While shopping for the next episode he had stopped by Radio Shack and bought a cassette full of holiday music and a special 2-minute continuous loop cassette tape. Back at the office, he dubbed that well known Burl Ives song ‘Have a Holly Jolly Christmas’ onto the endless cassette, but as the reels of the original cassette were turning he would press his finger against the capstan to slow the speed of the tape, causing Burl Ives’ voice to drop about 8 octaves and slow to a snail’s pace. As he released pressure from the capstan, the tape would momentarily speed faster than normal, sending Burl’s voice way into the chipmunk register. The finished product was a warbly octave-jumping masterpiece!”

Have a Holly Jolly Soundstage (PDF)