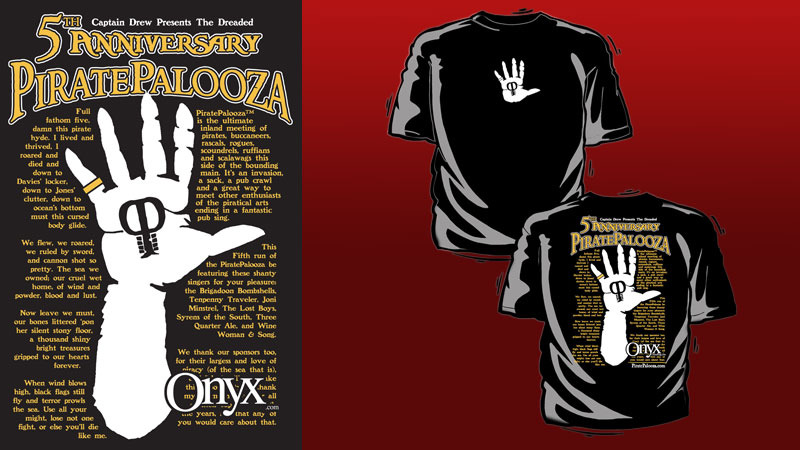 Captain Drew phoned me up and said that he had “an amazing idea for the best PiratePalooza shirt the world has ever seen” and asked me to meet him at the Krispy Kreme on Ponce. By the time I got there he’d already been involved in some sort of fracas with the manager over the definition of “hot & fresh”, and the police were loading him into the drunk wagon. As they drove away I saw his gloved hand pressed against the window of the back door of the vehicle.

The design for this shirt went through a couple of versions: first, I took a photograph of myself wielding a 24” metal ruler, printed it out, blew it up, threw some tracing paper over it and began sketching before pulling the artwork into Adobe Illustrator. Late into that process I realized that I just didn’t like the composition, and the pirate was so specific that it might not appeal to everyone. In fact, the only thing I liked about that version was the pirate’s outstretched hand.

With the print deadline looming and time running out I tossed everything but that outstretched hand and decided to turn it into the hand of a drowning pirate, wrapped in a poem. Inspired by the 2nd stanza of Ariel’s song “Full Fathom Five” from Shakespeare’s play “The Tempest” I added several new stanzas to that famous song.

“Full fathom five, damn this pirate hyde. I lived and thrived, I roared and died and down to Davies’ locker, down to Jones’ clutter, down to ocean’s bottom must this cursed body glide. We flew, we roared, we ruled by sword, and cannon shot so pretty. The sea we owned; our cruel wet home, of wind and powder, blood and lust. Now leave we must, our bones littered ‘pon her silent stony floor, a thousand shiny bright treasures gripped to our hearts forever. When wind blows high, black flags still fly and terror prowls the sea. Use all your might, lose not one fight, or else you’ll die like me.”

Postscript: Captain Drew wrote me later, from jail, thanking me for putting his hand on the chest of ‘every wench from Dorchester to Newcastle’.