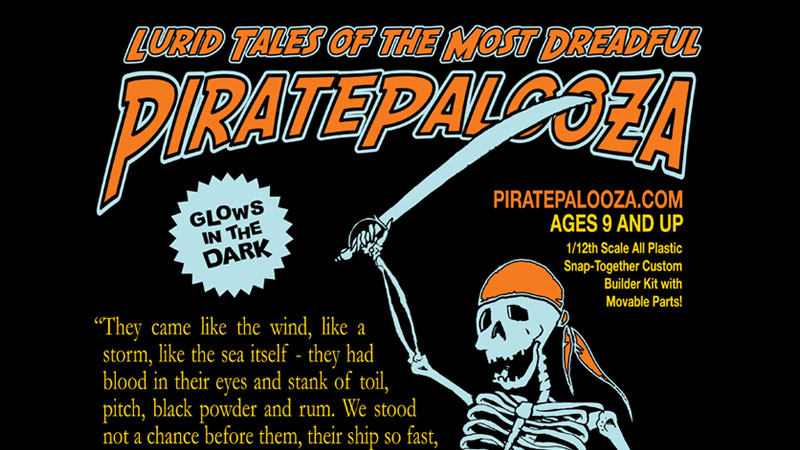 Early in the summer of 2012 a courier delivered a letter from Captain Drew with a list of shirt design concepts for that year’s PiratePalooza™ Pubcrawl & Pubsing. The majority of them featured topless, large-breasted women with pouty lips in various states of undress but after a consultation with his corporate lawyers he abandoned that idea and declared that he wanted to go with a “scary” theme instead.

We soon landed on the idea of paying tribute to the plastic skeleton model kits made by Revell in the 1970s. One fun aspect of model kits from that era is that they were made of plastic that glowed in the dark, so I decided to print the shirts using glow-in-the-dark ink. Several elements in the art on the back of the shirts pay tribute to the box art of the original model kits.

The skeleton on the back of the shirt began as a gestural sketch on tracing paper. From there I drew successive versions on new pieces of tracing paper until it was ready for inking, scanning, and transferring into Adobe Illustrator. I didn’t care whether or not it was anatomically accurate; I was looking for something light-hearted.

It took a day or two to ponder over which bits should be inked or stroked with the glow-in-the-dark ink, but once that was set the shirt artwork was sent to the printer.

Several months after the event in September I began hearing reports from girls who had been frightened by glowing apparitions in their closets and hallways. Every instance was a case of glow-in-the-dark ink doing its job!