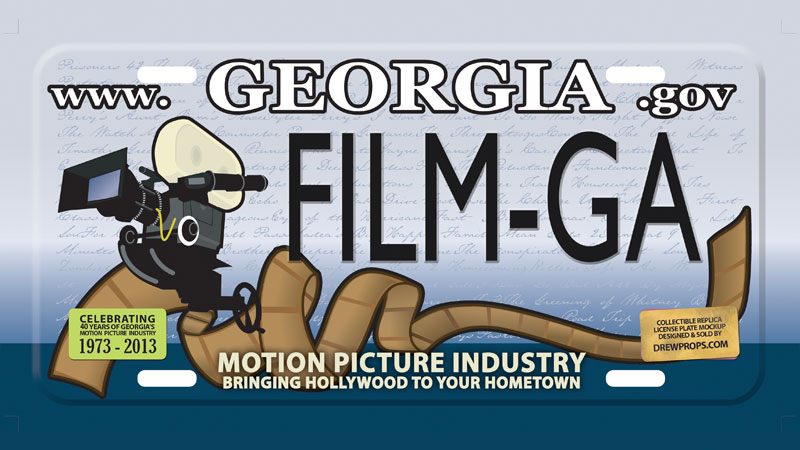 In 2003 I bought a new car and wanted to get a really neat movie industry oriented license plate to put on the front of it, but nothing existed. So, I sat down and began drawing what would eventually become known as the “Film Georgia” license plate. I sold the plates from 2004 through 2008, but after a few years out of the business I’d missed out on meeting an entirely new generation of technicians and it was hard for me to just walk on set like in the past.

Before turning on the computer I first sat down and sketched out a rough concept layout to see where all the elements should go on the plate. I then used photo references to create a vector illustration of the motion picture camera, using Adobe Illustrator. After nailing the artwork down I took it into Photoshop to add some grain back into the image. The spooling ribbon of film was relevant back in the day when I first designed this, but in this digital age I wonder if it seems antiquated.

As of the 2nd half of 2013 I’m back at it and will be selling the license plates on set for $20 or $30 via post for online orders. Drop me a line if you’d like me to come out to your set, but unless I know someone on the show I may need for you to clear it with your UPM.

To order a plate online just pop over to my special Film Georgia License Plates page.